Baby Reunites with Parents after Months in the NICU 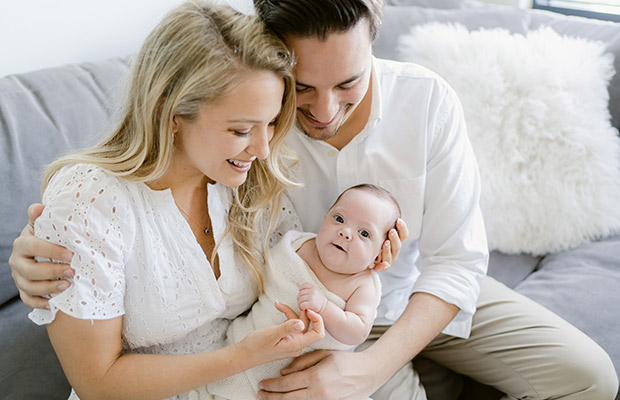 In December 2020, Daniel Furlong, a former urology resident at Jackson Memorial Hospital, and his wife, Sarah, were packing for their babymoon trip – four months before the expected arrival of their first child – when suddenly, Sarah began to experience uterine cramps.

The couple immediately rushed to The Women’s Hospital at Jackson Memorial, where doctors determined Sarah was in preterm labor. She remained hospitalized for observation, but the baby just couldn’t wait.

On December 30, 2020, with the help of Rachel Franklyn, MD, Jackson Medical Group associate medical director of obstetrics and gynecology, Sarah gave birth to a baby boy at nearly 25 weeks. Ryder, who weighed just 1 pound, 10 ounces, was immediately rushed to the neonatal intensive care unit (NICU) at Holtz Children’s Hospital. He remained intubated in the NICU for two months and had to overcome several medical setbacks, including pneumonia and brain bleeds, which caused him to have several seizures.

Ryder was also diagnosed with a condition called patent ductus arteriosus (PDA), an opening between the two major blood vessels leading from the heart that normally closes shortly after birth. He underwent a PDA ligation procedure, performed by Eduardo Alfonso Perez, MD, a University of Miami Health System pediatric surgeon, to correct the birth defect.

“He had to overcome so many medical challenges in the NICU that his medical team began calling him ‘Ryder the fighter’,” his father, Dr. Furlong, recalled.

When Dr. Furlong wasn’t tending to his patients, he was at his son’s bedside. Due to COVID-19 visitation restrictions, he and his wife took turns visiting Ryder.

“As a physician, I struggled with knowing too much and trying to relay that information to my wife without scaring her while being honest with her about Ryder’s progress,” Dr. Furlong said.

Last May, after spending 125 days in the NICU, Ryder was finally able to go home. The Furlong’s family and friends had anxiously awaited for this moment to come.

“Having Ryder as a patient was a journey for my staff and me,” said Dianne Bennett, ARNP, director of patient care services at Holtz Children’s. “Seeing him finally reunited with his parents after all he had gone through was such a heartwarming moment.”

Dr. Furlong and his wife are happy to be settling in with their son.

“Hearing Ryder cry at home was such a relieving moment,” Dr. Furlong said. “My wife and I had waited months to finally be with our son. We were so overjoyed to have him with us.”

“As a member of the Jackson family, it was encouraging to know that my son was truly in the best care possible,” Dr. Furlong said. “My wife and I are so appreciative and thankful to everyone who took care of Ryder, including all of the doctors, nurses, therapists, and ancillary staff who treated and loved him as their own child.”